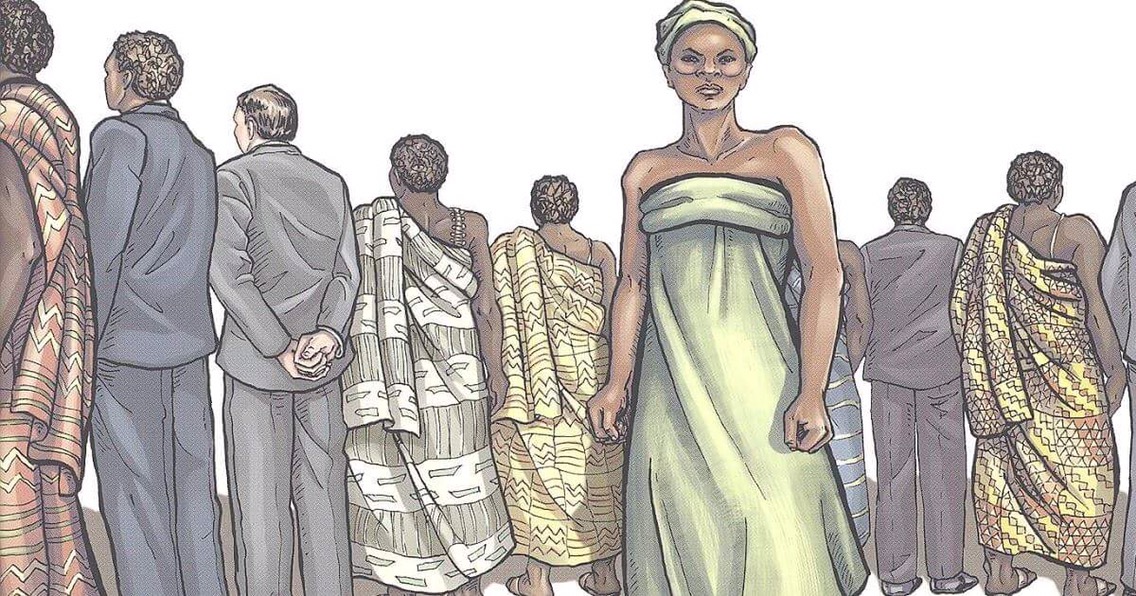 #DirectedbyWomen team member Shantré Pinkney chatted with filmmaker, director of San Francisco State’s DocFilm Institute, and president of BAWIFM (Bay Area Women In Film and Media) about her newest released film Abina and the Important Men, based on the true story of a young slave who escapes her master and brings him to court.

DBW: How did the project Abina and the Important Men come about?

SKB: Trevor Getz is an historian of Africa and a professor and found this event that happened with Abina. He was also trying to find a new way to teach historical stories to make them engaging and he took a risk taking these transcripts and turning them into a graphic novel with the help of illustrator Liz Clark. It won prizes and it really affected the classroom. They approached us and asked us if we can turn this into an app.

As we started working on it, it just came to life and so we took some extra steps to make sure that it could be used in the app as well as potentially be screened as a film or web series.

DBW: Tell us about the production. Most of the crew were from San Francisco State?

SKB: Yeah, so I’m the director of the Documentary Film Institute at SF State. We produced the film at our institute. We used our lead animator, an MFA student. There were several animators on the team.

We animated certain parts of the frame. It was hard – It took a long time. It should have taken three years, but we had one year to do it. We were very nose to the grind on trying to accomplish it and there were so many characters that come in the story. It was very challenging but very rewarding. It was definitely a test of our skills and rigor.

DBW: With the all the work you had to put into Abina, did you have to work on other projects too?

SKB: We had another short film, Con Moto, which is going to actually be on KQED this summer and we do a lot of projects for the university and clients too. Yeah, we didn’t come up for air for a while.

DBW: So tell us about Con Moto.

SKB: Con Moto, (which means ‘in motion’ in Italian) is a short documentary about the Alexander string quartet – a world famous quartet. The film follows them to Poland where they go to perform in the a Beethoven music festival. So it’s part road movie, part music film and they teach students to embrace the legacy of chamber music. It’s a really fun and energetic little documentary. It played in a few festivals and now it’s gonna play on Truly CA.

DBW: I’m looking forward to that. Please do send us a blast when Con Moto airs.

SKB: I will definitely send out a blast when [Con Moto] airs [on August 18].

DBW: What is your ultimate goal with this project including Abina?

SKB: What’s really awesome about the Abina project is it really accomplished a lot of our desires. Either working in new innovative forms of telling true stories (i.e animation) and using animation to kind of iterate a real documented story which is the newer form of looking at something. Most importantly it’s a story that hasn’t been told – that people don’t know about. That’s super important to our current way of life and has a lot of resonance with not just Americans but people all over the world. Young girls are still you know captured as slaves all over the world. It is still a problem. It’s so hard to extract girls from those situations and to even prove the wrongdoing because it can be looked at in so many different ways. It’s a much easier way to enslave someone if they’re young and children, especially girls. That’s a problem we want people to know about and that’s why we modernized [Abina and the Important Men] in terms of using people today and American accents and getting it that urban feel so there was some kind of connection to the world we’re living in now. This isn’t just something in the past. It also tells the story that hasn’t been told about history. We’re super interested in shedding light on those certain negative dark spaces in history that have not yet been illuminated. We know they’re there but we don’t totally know what happened. So it kinda fills in that space a little bit by knowing what she did.

Abina was really bold and risky. I mean she did some things that no one else would’ve done in her shoes. She could have really been hurt or killed. She took a tiny little step in the direction of justice – global justice; equity for women. Maybe she wasn’t even aware of what she accomplished in terms of a longer worldview. Now that we can bring her story to modern audiences we can hopefully see that this journey is long and takes a lot of people making individual decisions that push it forward little steps at a time. I really hope people see that when they see her story. I hope they empathize with her and feel for her and are proud of what she did.

DBW: I want to thank you and the crew and commend you all because there’s so many stories we’ve never heard of before. Like Hidden Figures, I was so surprised that I’d never of Abina’s story.

SKB: I so appreciate you doing a story about it. We as an institute, and me myself personally as a filmmaker, those are the things I prioritize in making my work or choosing what to work on. Speaking of Hidden Figures, we’re also working on a film called Madam Mars. It’s about women and the accomplishments they’ve made in our understanding of Mars and our attempts in eventually going to Mars and have this discussion on gender equity and the state science. It’s a very exciting thing and brings a nation together and we have a sense of awe about it – but we don’t necessarily remember that it’s still a boys club. And many women are left out of that equation. Hopefully this film will be done in about a year.

SKB: I have a personal documentary that is inches away from finishing about a community recycling center in San Francisco that was evicted to clean up the homeless problem in the neighborhood. People blamed them for homelessness and used them as a scapegoat to act like they address the issue but it’s really more of a gentrification problem. The film is called Nailhouse because they refused to leave and tells the story of their fight and how disenfranchised these poor and homeless recyclers are from the conversation in the mainstream and policy. Those are some other stories that will come out soon just to reflect my values – and that’s how I vet projects whether or not they meet up with my values. There’s always lots of cool stuff to do but there’s only so much time. Abina talks about it – to the victor goes the spoils. If you win and if you have the power, you get to decide what gets written down in the history book. There’s gatekeepers to history and to our experience and we really need to cast new people in those roles so that the stories that are told are more represented of what actually happened. Because it has happened. There’s no question about that. The question is whether we can all participate in that narrative and understand and make it partly of how we understand ourselves. That’s the goal. That’s what we’re trying to achieve.

Inspired by hip-hop, jazz and French New Wave cinema, Shantré Pinkney began her creative venture in New York and studied filmmaking in Atlanta, Los Angeles, and San Francisco. She is a creator in the mediums of photography, film, theater, and new media. Her work has been featured on Blavity, BlogHer, SF Chronicle and film festivals in Los Angeles, Atlanta, and New York. A lover of non-traditional and inquisitive stories, she creates to raise dialogue between art and her audience. Currently, she shoots doc and street photography and is developing a feature script. View all posts by Shantré Pinkney

Morgan Dameron: Life can be a bit messy in ‘Different Flowers’

Morgan Dameron: Life can be a bit messy in ‘Different Flowers’